Subsribe to our newsletter

Subscribe to our newsletter to receive the latest news and offers about our products. Your e-mail address will not be revealed to anyone.

Submit
Get in touch !

The reservation has been send, we will contact you soon!

Rare Erminette, they are TOPS here on our farm. Gentle, big, dual purpose birds,that are excellent layers of large eggs. Roosters are amazing and do their job better then any breed on the farm. Erminette chicks are the healthiest, largest, fastest growing chicks we have. The hens are good layers of 180 plus LARGE light brown eggs a year. They will go broody and will set. They are quite winter hardy and good foragers. They have nice temperaments and we are able to have multiple roosters in the flock with little to no fighting.

We LoVe ❤️ the Erminette! The Erminette story is very compelling and those that research them are drawn to them.

The name Erminette is given to both a color and a breed in progress. The Erminette colour is a very attractive white with, ideally, even black spotting, it is not a true breeding colour, crossing two Erminette colored birds also giving white and black birds. You will hatch white, Erminette and Black coloured chicks.

Erminette were shown starting in the 1870s in the United States, first apparently by John H. Sutliffe of Bristol, Connecticut later followed by a number of other breeders. There was never a set type for the bird, but geneticist Mr F.B. Hutt and breeder Mr. Burr starting around the 1940’s studying the genetics of the Erminette pattern developed a line of single combed birds of Plymouth Rock body type, that eventually became the generally accepted type by default.

The breed was considered extinct by the SPPA in the 1980’s, but as luck would have it, in the 1990’s Ron Nelson came across a flock in Wisconsin from which he obtained hatching eggs. He worked on improving the breed, but his untimely death lead to his flocks being dispersed and the remaining Erminette flock was crossed with other breeds. Glenn Drowns of Sand Hill Preservation Center eventually obtained some of these birds and, along with a number of other breeders is bringing back the Erminette as a breed.

We are so excited to share this beautiful rare breed. 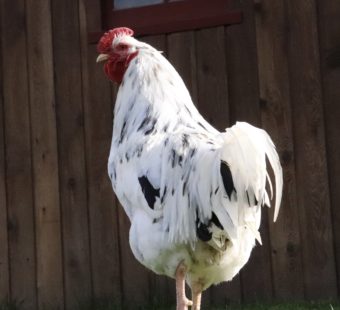